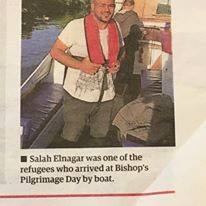 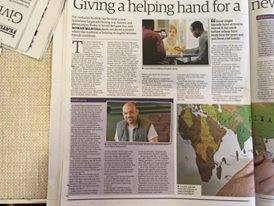 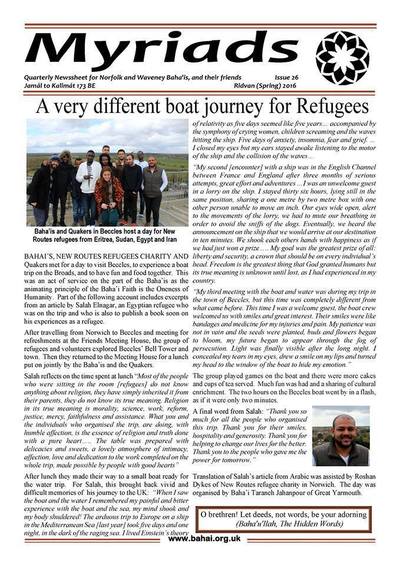 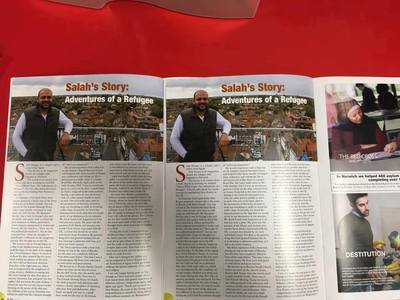 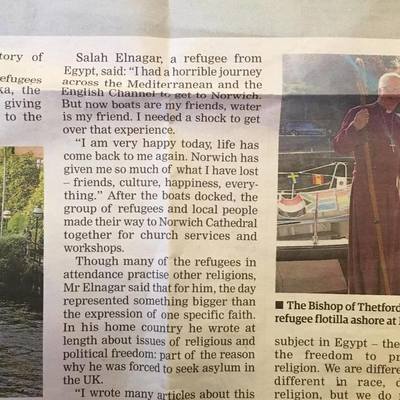 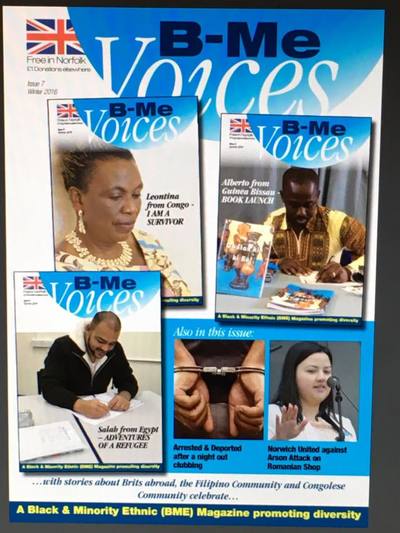 This article is part of a book to be published in the near future, its name is This is What I Saw; The Adventures of a Refugee.

On Saturday 23rd April 2016, New Routes prepared a leisure trip to the town of Beccles with Bahai friends. The goal of the trip to the town for me was recreation, to break the boredom of routine, fulfil my desire to see new places, in addition to learning about the cultural and historical geography of East Anglia where I live.

I woke up early to go to the bus station to meet at 9:45 am. I found some friends waiting until Roshan arrived, one of the individuals who had organized the trip. We took a bus which took us to the town of Beccles around thirty minutes away from Norwich. We got off the bus at the station and waited for Taraneh who had prepared and organised the trip. At the station, pictures were taken as we talked and laughed happily and cheerfully. At last, Taraneh arrived, welcomed us, and took us to a large building in the town, named The Friends Meeting House, and we found some people waiting for us, welcomed us, and everyone took a seat. They asked us about our names, and brought us some tea with biscuits. We also discussed the fact that it was St George’s day.  As we sat in the room, two elders, who were Quakers, came to meet us and asked us about our names and the names of our countries. The majority of the group were from Sudan and Eritrea. The elderly man spoke with us about the poor situation in Africa, particularly Sudan and Eritrea, and religions also, and some of the countries had suffered from religious persecution. He also asked us, “Has one of you suffered this persecution?”, but no one answered him. And I said to myself, addressing the old man:

"My friend, do not disturb the purity of our journey, we do not talk about religions now. Most of the people who were sitting in the room do not know anything about religion, they have simply inherited it from their parents, they do not know its true meaning. Religion in its true meaning is morality, science, work, reform, justice, mercy, faithfulness and assistance. What you and the individuals who organised the trip, are doing, with humble affection, is the essence of religion and truth done with a pure heart.”

We then went together to a new place, Beccles Parish Church, with great architecture, wonderful art and decoration. We went up the highest church tower, Beccles Bell Tower. It stands near the edge of a cliff overlooking the River Waveney, and rises an additional 97 feet (29.6 m) and is thirty feet square (9m) at its base. It dominates the town as well as the surrounding countryside, much of which is comprised of The Broads National Park. Views of the Waveney, the North Sea on the eastern horizon, and the flat terrain of the broads extending south into Suffolk and, across the river, into nearby Norfolk, can be obtained by scaling the hundred steps to the top of the tower. We had seen the entire town and took pictures together in happiness and fun, and then we went to the park adjacent to the tower and we played football for 30 minutes. We then went back to The Friends Meeting House for lunch, the table prepared with delicacies and sweets, a lovely atmosphere of intimacy, affection, love and dedication to the work completed on the whole trip, made possible by people with good hearts. Whilst eating, I discussed with my friends at the same table, about seahorses and shells for I was eating sweets shaped like such. We went on to speak about plants and animals and I said to my friends that culture and reading is very important to life and building one’s character.

The arduous trip to Europe on a ship in the Mediterranean Sea took five days and one night, in the dark of the raging sea. I lived Einstein’s theory of relativity as five days seemed like five years. I had studied the physics of the dark sky but I did not find more darkness than the sea, which was accompanied by the symphony of crying women, children screaming and the waves hitting the ship. Five days of anxiety, insomnia, fear and grief. For five nights I did not know the taste of sleep, I closed my eyes but my ears stayed awake listening to the motor of the ship and the collision of the waves. Insomnia was killing me and I thought “I do not know what tomorrow will bring, will I even see tomorrow? Or will I be food for the hungry sea fish??”

My second anniversary with a ship was in the English Channel between France and England after three months of serious attempts, great effort and adventures such as that of James Bond, Arnold Schwarzenegger or Sylvester Stallone. My lucky night came on the 14th October 2015. I was an unwelcome guest in a lorry on the ship. I stayed thirty six hours, lying still in the same position, sharing a one metre by two metre box with one other person unable to move an inch. Our eyes wide open, alert to the movements of the lorry, we had to mute our breathing in order to avoid the sniffs of the dogs. Eventually, we heard the announcement on the ship that we would arrive at our destination in ten minutes. We shook eachothers hands with happiness as if we had just won a prize.

Four months of fatigue, pain and adventures, risking my life to break through the fences of Europe, like the adventures of James Bond, Arnold Schwarzenegger and Sylvester Stallone. But unlike these actors, I did not want my adventures to be famous, displayed on the TV, or rewarded with an Oscar to cheers and applause from the public. Also, I did not want money in my bank account. My goal was the greatest prize of all: liberty and security, a crown that should be on every individual’s head. Freedom is the greatest thing that God granted humans but its true meaning is unknown until lost, as I had experienced in my country.

My third meeting with the boat and water was during my trip in the town of Beccles, but this time was completely different from what came before. This time I was a welcome guest, the boat crew welcomed us with smiles and great interest. Their smiles were like bandages and medicine for my injuries and pain. My patience was not in vain and the seeds were planted, buds and flowers began to bloom, my future began to appear through the fog of persecution. Light was finally visible after the long night. I concealed my tears in my eyes, drew a smile on my lips and turned my head to the window of the boat so my emotion. I felt the spirit of the writer enter me once again, the buds of creativity beginning to flourish, enabled by the fertile lands of freedom and safety here in the UK. I felt that I wanted to write an article about the trip and ideas raced through my head, contending to be written down but were interrupted by a game with friends. The game was ‘Empires’, where each person writes down a name of a famous person, past or present, and then has to guess who wrote each name. A successful guess means that person joins their Empire and the winner is the last one remaining. Some of the names chosen from what I remember were Queen Elizabeth II, president Obama, Churchill, Nefertiti, Albert Einstein, Omar Sharif, St George, Omar Mukhtar, Idi Amin, Donald Trump and Nelson Mandela. The game lasted for thirty minutes and I was hoping that the game turned into a cultural dialogue. Most of the group had chosen the names of famous people but did not know their background or history. Suddenly, Taraneh asked about Omar Mukhtar and I told her that he was a resistance fighter in Libya and fought against the Italian invasion forces who entered the land of Libya in 1911. He fought at the age of fifty three for more than twenty years in a large number of battles until he was arrested by the Italian soldiers. He underwent a mock trial, resulting in the death sentence by hanging in 1932, at seventy three years old. I wished to discuss another name chosen in the game but the trip came to an end. This time I lived Einstein’s Theory of Relativity opposite to when I crossed the Mediterranean: the two hour trip felt like two minutes. After the boat trip we returned to the bus stop and my mind filled with hope, positivity and dreams for the future. Thank you so much for all the people who organised this trip. Thank you for their smiles, hospitality and generosity. Thank you for helping to change our lives for the better. Thank you to the people who gave me the power for tomorrow.